The inventor of the iconic AK-47 assault rifle, Mikhail Kalashnikov, has died at the age of 94. His ingenuity earned him widespread admiration, but his legacy became more controversial when his weapons were used in some of the world’s bloodiest conflicts.
“Mikhail Kalashnikov’s entire life is a shining example of dedication to serving your country,” said a statement from Defense Minister Sergey Shoigu.
“For many generations of Russians his name became a symbol of the glory and reliability of our weapons, and a source of national pride.”
Russian President Vladimir Putin expressed “deep condolences” over the death of the engineer.
Kalashnikov who continued working well into his nineties, had been suffering from heart and intestinal problems, and on November 17 was admitted into intensive care in Izhevsk in central Russia – where the plant that produces the eponymous rifles is located. The official cause of death will be revealed following a mandatory autopsy.
A public funeral will be organized by the regional administration, in consultation with surviving relatives, though no date has been named so far.

For most of his life, Kalashnikov, who was famous for his frugal lifestyle, was feted as a straightforward hero.
The self-taught peasant turned tank mechanic who never finished high school, but achieved a remarkable and lasting feat of engineering while still in his twenties.
But as the rifles, inextricably linked forever to their creator by name, were more and more commonly seen in the hands of terrorists, radicals and child soldiers, the inventor was often forced to defend himself to journalists.
He was forever asked if he regretted engineering the weapon that probably killed more than any other in the last fifty years, though nine out of ten AKs are not produced in Izhevsk, and perhaps as many as half are manufactured illegally.
“I invented it for the protection of the Motherland. I have no regrets and bear no responsibility for how politicians have used it,” he told them.
On a few occasions, when in a more reflective mood, the usually forceful Kalashnikov wondered what might have been.
“I’m proud of my invention, but I’m sad that it is used by terrorists,” he said once.
“I would prefer to have invented a machine that people could use and that would help farmers with their work – for example a lawnmower.” 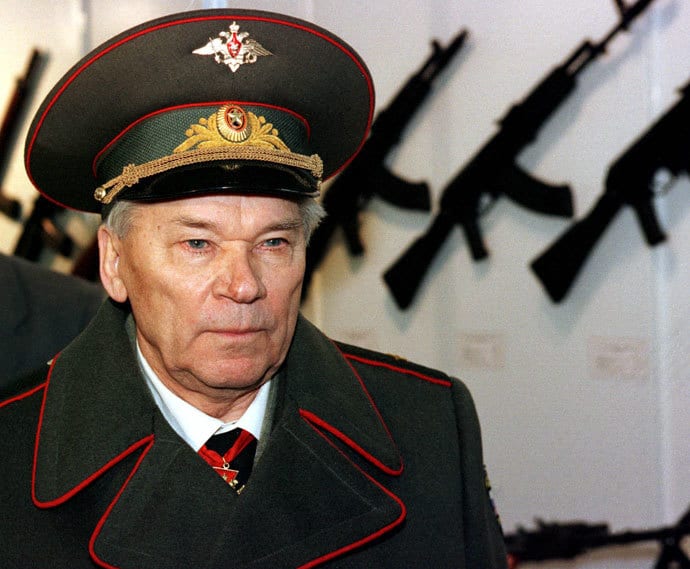 Indeed, at his museum in Izhevsk, where he spent most of his life working at the factory that was eventually named after him, there is an ingenious mechanical lawnmower Kalashnikov invented to more easily take care of the lawn at his country house.
It’s not what he will be remembered for.
Considering his age and circumstances, it was hardly surprising that Kalashnikov felt he could best serve his country by creating weapons.
Born in 1919, Mikhail was the seventeenth child of well-off peasants. When he was eleven, during Joseph Stalin’s collectivization campaign his parents had their land confiscated, and the whole family was exiled to Siberia (a fact rarely mentioned in fawning Soviet-era biographies).
As the country began to mobilize ahead of a war that seemed inevitable, but was as yet undeclared, Kalashnikov chose to go into a tank brigade.
His aptitude for engineering was immediately apparent.
He was allowed to create several modifications – a tank shot counter, a running time meter – that were to be adopted for the whole Red Army, and made him famous. He was destined to go on an engineering course, when Operation Barbarossa intervened.
Kalashnikov’s own career as a tank commander was cut short in the first few months of the conflict on the Eastern Front, when an explosive shell ripped open his shoulder.
Kalashnikov says the germ of the idea came to him as he recuperated in hospital.
But the invention of the AK-47 was not a Eureka moment, but a trial-and-error process of modifications and improvements undertaken by a team over six years. 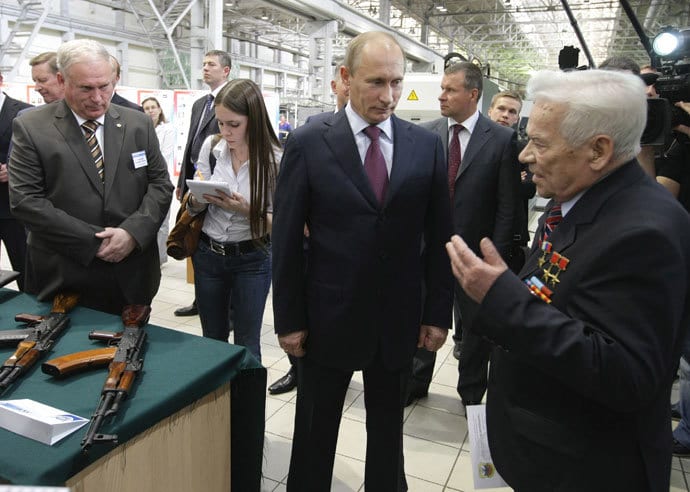 While for propaganda purposes Kalashnikov’s invention was presented as a radically new development, it was based on several principles that had already been seen in British, Russian and Italian weapons to which the inventor had easy access as he drew up his blueprints.
Its main precursor was the German StG 44, the first truly effective automatic weapon of World War II.
But at the same time, Kalashnikov’s masterstroke was to combine the mechanisms of previous weapons to create something with a completely new function.
AK-47 is not a weapon designed for accuracy tests at the firing range. It is a weapon for firefights at close quarters, in harsh Russian conditions.
It can be assembled by a person with no military training, is fired by simply pointing at a target, and it can be easily looked after without a cleaning kit. It does not jam by itself (due to the generous allowances between moving parts, which also explain its mediocre accuracy at range) and it does not stop functioning in any weather conditions.
The AK-47 fulfilled its design brief to perfection, even though there is no way Kalashnikov could have known who it would be used by in the end. More than 60 years after its invention, it remains the world’s most ubiquitous weapon. 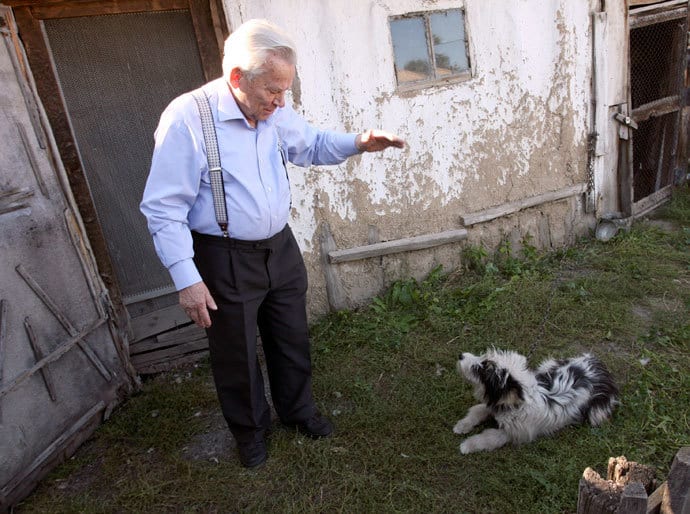 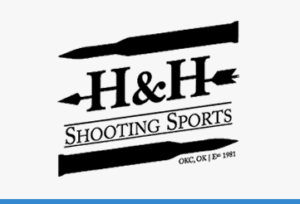