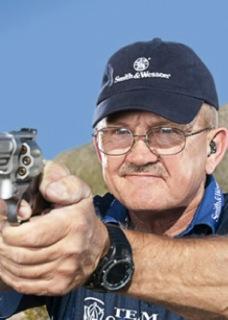 Grand Island, NE – Hornady® Manufacturing is pleased to announce speed shooting legend Jerry Miculek has joined their team of sponsored shooters.
Miculek holds dozens of national and international handgun, rifle, and shotgun titles. He is one of the fastest revolver shooters in the world, capable of emptying a five-shot revolver in 0.57 seconds in a group the size of a playing card.
“Being a Team Hornady member provides broad spectrum access to shooting products that are second-to-none,” said Miculek. “Hornady pistol bullets are standard fare in competitive circuits because they work. And Hornady rifle products will be instrumental as I begin to enter more rifle competitions.”
Miculek holds a lengthy list of titles and awards, including:
• 20-time STEEL Challenge World Speed Shooting Revolver Division Champion
• 10-time IDPA Enhanced Service Revolver National Champion
• 8-time USPSA National Revolver Champion
• 8-time USPSA Multi-Gun Champion
• 4-time 2nd Chance Bowling Pin Champion
• 1997, 2007, 2011 World Shoot-Off Champion (The only person to ever win this title with a revolver.)
• Member of 9-time winning pro team at the Sportsmans Team Challenge
• 3-time Masters International Long Gun Champion
• 2-time ISPC World Revolver Champion
• 2-time Industry Masters Champion
He is the current titleholder in the following:
• USPSA National Revolver Champion
• IDPA National Revolver Champion
• IDPA World Revolver Champion
• Steel Challenge Revolver Challenge
• Member of the World Action Pistol Championship Team, Metallic Sight
And he is the world revolver speed shooting record holder, shooting:
• 8 shots in 1 second
• 6 shots-reload-6 shots in 2.99 seconds
• 6 shots, 2 on each of three targets, in 1 second
• 60 shots out of 10 revolvers in 17.2 seconds
• 5 shots in 57 hundredths of a second
“We are very pleased to add Jerry to our team,” added Neal Emery, Hornady® Communications Manager. “He is a phenomenal competitor, a genuine and approachable guy, and a great ambassador for the shooting sports.”
Miculek shoots in competitions approximately 150 days per year. He lives on a range by Princeton, Louisiana, with his wife, Kay Clark Miculek, who is also an accomplished professional shooter.
Founded in 1949, Hornady® Manufacturing Company is a family owned business headquartered in Grand Island, Nebraska. Proudly manufacturing products that are made in the USA, Hornady® Manufacturing is a world leader in bullet, ammunition, reloading tool and accessory design and manufacture.
For further information regarding Hornady® products, visit the company web site at http://hornady.com. Media members interested in Hornady® products for editorial review, should contact Neal Emery atnemery@hornady.com.

Our online store is powered by Sports South, one of the nation’s largest distributors. All items listed online are filled via distributor. Typical orders are filled within 3-5 business days however it may be longer due to the level of demand. We will call you when your order has arrived for in store pick up.

Please note that our online listed prices and inventory that are reflected online are online exclusives and may or may not match our in-store inventory.

By proceeding, I understand that not all items on the website are available at our store location.