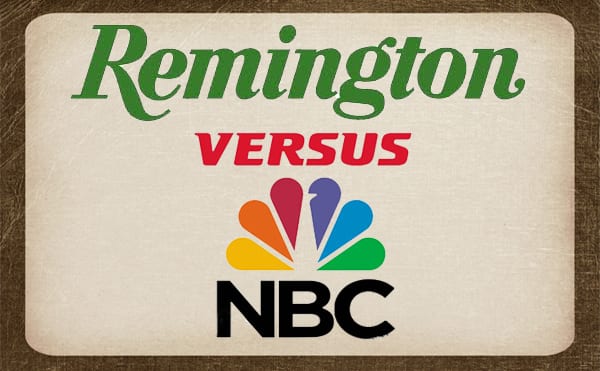 In 2010, NBC News’ “Dateline” ran a report purportedly telling the story of Remington’s knowingly allowing their entire 700 series of bolt-action rifles to be sold despite t knowing that the rifle’s trigger system had a basic safety flaw. Essentially, Dateline reported Remington had knowingly sold more than five-million unsafe bolt action rifles, despite knowing – for decades- there were serious safety issues.

When that report aired, it caused quite a stir in the industry, and kicked off a massive response effort from Remington. As is common in an ever-shortening news cycle, the story was quickly forgotten.

Except, it seems, by NBC News.

Last night, I learned that promos for tonight’s upcoming episode of “Rock Center with Brian Williams” promises yet another exclusive report into Remington and its allegedly faulty firearms.

In the promotional clip for his latest investigation into Remington, (see it yourself at: http://rockcenter.msnbc.msn.com/_news/2012/04/10/11119192-remington-denies-allegations-of-ignoring-potential-defect-in-some-rifles-shotguns?lite), Senior Correspondent Cohn says Remington didn’t just have problems with their 700 line of bolt guns.

There are more than 20 million of those shotguns in the marketplace, from family gun cases to the ready rooms of thousands of law enforcement and military facilities. That is a ton of potential liability in any situation; in the case of firearms, it presents a nearly incalculable potential liability exposure.

That’s why Remington’s 2012 response isn’t technically a “response”. Instead of reacting, Remington is firing back- before NBC’s full-story has been aired.

“The over 20 million firearms NBC is attacking have been used for nearly 60 years by hunters, shooters, military and law enforcement and they have been time-tested under some of the harshest conditions known to man,” says Wally McLallen, Vice Chairman of Freedom Group, Inc and Remington. “NBC has chosen once again to base their attack on the agendas of plaintiffs’ attorneys and paid “experts” that have testified against more than a dozen of the biggest manufacturers, as opposed to the experience of tens of millions of sophisticated shooters and tens of billions of rounds.”

Cohn’s original report was based on conversations with “victims” of the Remington 700 rifle, and firearms “experts” whose primary expertise -even before any serious scrutiny – seemed to be testifying against Remington. In 2010, Remington put tremendous resources into rebutting the NBC report, including lengthy point-by-point rebuttals of each charge made in the report.

And, as Remington’s spokesperson reminded me last evening, “NBC never bothered to respond.”

Now, it seems Remington and Freedom Group, Inc. aren’t expecting NBC to offer any response/rebuttal time. As it was explained to me last night, “We expect the same disregard for the facts and anti-gun sentiment to be repeated in the upcoming NBC story.”

In Remington’s decidedly-proactive response to this latest NBC report, they’re pointing out an obvious truth: there are twenty million model 870 and 1100s out there. Collectively, they’ve fired billions of rounds, in hunting fields, on battlefields, and by law enforcement agencies around the world.

Trying to hide a major defect with that many guns in the hands of so shooters with such varied levels of experience would be virtually impossible. Further, Remington offers “no litigation is pending against the trigger mechanisms of these firearms and only one lawsuit has been filed in the last seven years.”

If you make any product, especially one with the potential to cause injury, you know some customers will operate them improperly. You also know lawsuits are a fact of today’s business life.

From their response, it seems Remington’s also making their case to their fellow manufacturers and the millions of shooters across the country that there’s now another “given”: an anti-gun bias.

“When contacted by NBC about this story,” Remington’s statement reads, “Remington provided the network with a vast amount of information about the true facts of these iconic American firearms and the so-called ‘expert witnesses’ employed by plaintiffs’ attorneys.”

“Given NBC’s long standing relationship with plaintiffs’ attorneys and their paid experts, Remington is not surprised that NBC has once again chosen to ignore the facts to push the Network’s anti-gun agenda.”

That “inherent bias” Remington says, is the reason they declined to participate in an on-camera interview.

In television news circles, those are fighting words.

For networks already scrambling to maintain credibility in an ever-changing information landscape, Remington’s detailed rebuttal of NBC’s Rock Center story might once again be ignored, or get a grudging acknowledgement worded so as to call the response it acknowledges into question. I’m comfortable offering that hypothetical because I’ve seen the technique used -effectively- innumerable times over more than thirty-five years in the news business.

But “questionable editing processes” demands a response. It will be interesting to see what NBC’s response will be – or when. It may be as soon as this evening.

As always, we’ll keep you posted.

Remington has responded to NBC, in this written response from their website www.respectremington.tv

In yet another unwarranted attack on Remington and the firearms industry, NBC will soon air a report about
Remington Arms and several of Remington’s most popular shotguns and rifles. In this upcoming story, NBC is using
the same producer and reporter who, in 2010, attempted to denigrate our Company and the Model 700, the most
popular bolt-action rifle in the world. Now they are at it again, only this time they have set their sights on the most
popular shotguns in the world, the Remington Models 870 and 1100. First, they went after 5 million lawfully owned
firearms. Now, they’re going after over 20 million firearms.
Gun owners and shooters are all too familiar with NBC’s long history of anti-gun reporting. The Network proved its
proclivity for sensational reporting and its aggressive anti-gun agenda in its baseless attack on the Model 700, and
its suggestion that the Consumer Product Safety Commission should control the firearms industry.
The previous CNBC story was based on rumors, unsubstantiated claims and misstatements, rather than factual
evidence of the reliability and performance of the more than five million Model 700 bolt-action rifles produced over
50 years. The misinformation and sensational allegations were clearly addressed by Remington in a point-by-point
rebuttal, to which CNBC never bothered to respond. We expect the same disregard for the facts and anti-gun
sentiment to be repeated in the upcoming NBC story.
Unfortunately, NBC continues to push the agendas of plaintiffs’ attorneys and anti-gunners, relying on their clearly
biased assertions, and upon paid so-called “experts.” These “experts” have been repeatedly hired by plaintiff’s
attorneys to testify against Remington, as well as at least 16 other firearms manufacturers, to suit their own
personal and economic agendas.
Model 870 and 1100 owners know the truth. These shotguns are used extensively under the most demanding
conditions. Tens of billions of rounds have been fired through these firearms, which are valued for their
performance and durability by tens of millions of hunters, shooters, law enforcement and military personnel who
have relied on these firearms for over 60 years. The experiences of these users stand as a sophisticated and timetested proof, to the quality and reliability of these firearm platforms. The facts show that the Model 870 and 1100
are two of the most reliable shotguns ever produced. Despite the efforts of plaintiffs’ attorneys to drum up business
against these popular firearms, no litigation is pending against the trigger mechanisms of these firearms and
only one such lawsuit has been filed in the last seven years.
When contacted by NBC about this story, Remington provided the Network with a vast amount of information about
the true facts of these iconic American firearms and the so-called “expert” witnesses employed by plaintiffs’
attorneys. Given NBC’s long standing relationship with plaintiffs’ attorneys and their paid experts, Remington is not
surprised that NBC has once again chosen to ignore the facts to push the Network’s anti-gun agenda. In light of
NBC’s inherent bias, Remington declined to participate in an on-camera interview, which would have exposed
Remington to NBC’s questionable editing processes.
No biased and sensational media story can diminish the pride that Remington employees take in our Company and
its products. It is disappointing that NBC continues to choose sensationalism over American industry. Remington’s
parent company employs nearly 3,000 proud Americans across 11 states, producing firearms and ammunition, 99%
of which are Made in the USA. Hunters and shooters pump approximately $25 billion annually into the U.S. economy,
supporting close to 600,000 domestic jobs, in addition to contributing approximately $2.9 billion annually directly
to wildlife and habitat conservation.
These agenda-driven, sensational stories should be a warning to all lawful and responsible hunters, shooters and
gunowners to remain vigilant and steadfast in defense of our Second Amendment freedoms and the right of all
Americans to safely hunt, shoot and protect ourselves and our families.
Please visit www.RespectRemington.tv to learn the truth about Remington and its firearms

Our online store is powered by Sports South, one of the nation’s largest distributors. All items listed online are filled via distributor. Typical orders are filled within 3-5 business days however it may be longer due to the level of demand. We will call you when your order has arrived for in store pick up.

Please note that our online listed prices and inventory that are reflected online are online exclusives and may or may not match our in-store inventory.

By proceeding, I understand that not all items on the website are available at our store location.