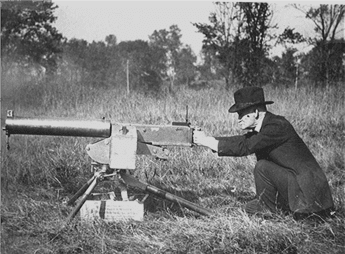 John M. Browning was a man who knew how to deliver.

“If there was ever a man who was focused and remained that way until a project was completed, it was John,” Scott Grange, director of public relations and shooting promotions for Browning/Winchester Repeating Arms, told IBD.

“His creativity and focus was superhuman, and nothing could seem to distract him.”

Browning (1855-1926) grew up in the pioneer town of Ogden in northern Utah. His father was a gunsmith, and young John was able to take a rifle apart and put it back together by age 6.

A year later he started working in the family shop, and at 10 he made his first rifle from scraps.

When John was 13, a customer came in with a damaged rifle and left it after buying a reconditioned one. “I decided to take the gun apart down to the last small screw, even though the parts were mashed and twisted together,” Browning recalled. “I examined each and discovered that there wasn’t one I couldn’t make myself.”

He attended school until 15, then worked full time in the family business doing repairs and producing custom firearms. When his father died, 23-year-old John took charge and a year later received his first patent, for a superior single-shot rifle. With his younger brother, Matthew, as a partner, he set up a factory where they could turn out two a day. They were on the way to building Browning Arms Co.

In 1883, a salesman for Winchester Repeating Arms of New Haven, Conn., bought a secondhand rifle from a gun shop in the area and gave it to the vice president, T.G. Bennett.

Deal. “John established a two-decade-long business relationship with the largest firearms manufacturer in the country on a handshake,” said Grange. 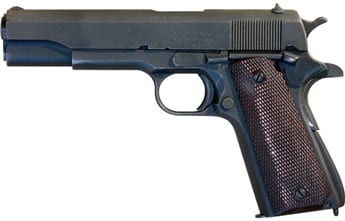 Browning’s .45-caliber gun was a crucial sidearm for the U.S. Army.

The Browning Model 1885 single-shot rifle was in production for 35 years (model numbers were based on the year introduced). It was popular with hunters because of its accuracy and reliability and caused the demise of all competitors.

While that was in process, Browning showed Bennett his new repeating rifle, for which Winchester paid an astounding $50,000, worth $2 million now. This became the Model 1886 that was made for 70 years and appeared in countless Western movies.

Then came Browning’s 1887 lever-action repeating shotgun that became a favorite of lawmen and outlaws in the Wild West.

“He was a hands-on manager of the entire process of gunmaking, field-testing every experimental gun as a hunter and skilled marksman and supervising the manufacturing,” said David Miller, author of  “The History of Browning Firearms.” “He was the complete man: inventor, engineer, entrepreneur.”

Then in 1887, Browning did the unusual at age 32: He agreed to become a missionary for his church in the South, leaving his wife and son home for two years.

When he returned, he turned day-to-day management of the business over to his brothers so he could concentrate on new designs.

Among the most important:

• 1893 pump-action shotgun, which was used by U.S. soldiers in close combat during World War I.

• 1895 lever-action repeating rifle, which was Teddy Roosevelt’s favorite for hunting big game and used by the U.S. in the Spanish-American War and by the Russians in World War I.

On the eve of the 20th century, Browning noticed that when a friend fired a rifle, tall weeds near the muzzle were moved by the energy released. He thought he could harness that energy to automate loading the next round. He worked on this for the next decade, collecting patents.

“In 1899, Browning showed Bennett a prototype of his most daring innovation, an automatically self-loading shotgun,” wrote Curt Gentry and John Browning (the inventor’s son) in “John M. Browning: American Gunmaker.” “After countless obstacles mastering the principles of automatic arms, his patents for this would give him a monopoly longer than any other popular gun in history. No sporting arm ever made a more sensational entry into the market.”

Knowing he had a major winner, Browning for the first time demanded a royalty. That meant Bennett had to manufacture it — and since he thought it was too radical, he wouldn’t take the risk.

Furious, Browning took his revolutionary gun to Belgium’s Fabrique Nationale, which began marketing the automatic shotgun in 1904 for the overseas market. Remington Arms Co. of Ilion, N.Y., made it for the U.S. starting in 1906.

“This became the M1911, the official sidearm of the U.S. military until 1985, when it was replaced by the M9 Beretta,” said Bill Doyle, co-author with the late Chris Kyle of  “American Gun.” “It is powerful, as well as simple, reliable and easy to manufacture. Sgt. Alvin York used one to capture 132 Germans in World War I. It armed our soldiers during the assault on Guadalcanal and on D-Day in World War II and stopped human wave attacks in Korea. Many special ops warriors continue to prefer it.”

R.L. Wilson, author of “Colt: An American Legend” and “Winchester: An American Legend,” the company histories, said, “Without the unique input of John Browning, both Colt and Winchester would not have been able to exercise their remarkable dominance of the firearms field for so many decades.”

At the top of the list of his many feats in the ensuing years was his M2 Browning .50-caliber machine gun. For this and the rights to make the .45-caliber automatic pistol and the Browning automatic rife, he patriotically accepted $750,000 from the U.S. government in 1917 in lieu of royalties.

During World War II, such royalties would have amounted to $13 million (worth $166 million today).

He would not live to see the M2’s impact. Two million were produced in America, and the placement of the .303 version on Hurricane fighters helped determine the outcome of the Battle of Britain.

George Chinn wrote in “The Machine Gun”: “Students of warfare are generally in agreement that this was the most far-reaching single military decision made in the 20th century.”

Browning made 61 trips to Liege, Belgium, to oversee production and develop new products. He died at his workbench there at age 71, and his body was escorted by military guard to Ogden, where the secretary of war gave the eulogy.

Miller estimates that 40 million firearms have been sold that originated with Browning’s designs, many of which can be seen at the John M. Browning Arms Museum in Ogden.

Today, Browning Arms is a subsidiary of the Belgian outfit now called FN Herstal and makes the Winchester brand by license after the firm went bankrupt in 1992.